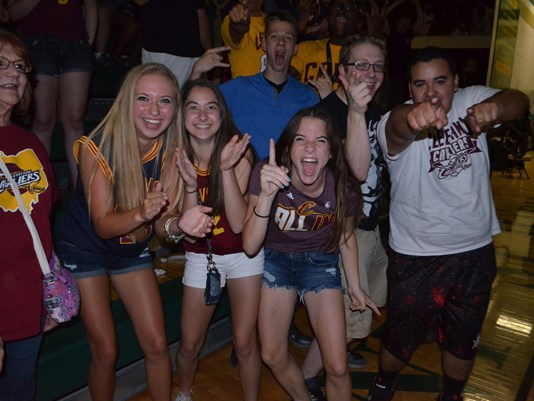 Timing is, they say, everything.  Here is the report I gave at Annual Conference in 2015.  Looking back, it seems I was a year ahead of my time.

I don’t know if you’ve noticed or not, but in the last couple of months things are different in downtown Cleveland.  The Cavaliers are good.  Really good, and they just might win a Championship.

As I considered this, I thought back to a conversation I had with Bishop Hopkins in May probably six or seven years ago.  We were just chatting and at the time the Indians were doing quite well.  He asked if I thought they would win the World Series that year.  I scoffed and said, “No, of course not.”  He pointed out their current record and quality pitching.  I told him, “You have to realize that Cleveland has not had a championship since before I was born.  Why would I expect that to change?”

And, of course, I was right.  Another summer went by without a Tribe victory parade in November, just as every Browns and Cavaliers season has gone by since 1964.  Those teams, along with two seasons by the Cleveland Barons Hockey team,  have combined for about 150 seasons without a championship.  By comparison the City of San Diego is in second place with about 100 seasons.

We have learned to temper our expectations.

The problem that I see with some of the churches I work with is that they have the same defeatist attitude as Cleveland sports fans.  I have pastors lamenting that finances are tight   So they’re left limping along, shrinking programs, burned out staff, out-of-date facilities.  When I ask the laity what they would brag about their church they go back to the glory days and tell me how things used to be, a decade or more ago.

But when I ask them about their stewardship program their eyes drop and they tell me that they don’t do a stewardship campaign.  Some say they have never done one, others say they used to… and their voices trail off.  They don’t have the resources to do the kind of ministry the community needs them to do, and at the same time refuse to do what is necessary to make those resources happen.  We have churches in our conference that can’t claim a ministry victory for a long time.

It’s kind of like I’m talking to Cleveland sports fans.

If this sounds like your church, I offer you a challenge this morning. I challenge you stop looking at Cleveland sports since 1964.  Instead, look to this season.  A team and a city that have been down accomplished the unthinkable and just might win that championship.

What would winning a championship look like for your church?  It would have to start with a vision, a dream, and hopefully that dream isn’t a balanced budget or shorter finance committee meetings, but instead a vision to be as Bishop Hopkins calls us to be, mission outposts to your community.

To do this, you would have to challenge your congregation to see that vision for ministry.  You would challenge them to meet that vision through their financial gifts, their volunteer hours.  Maybe you have such a huge vision that your congregation can’t pull it off alone and you need to involve that other United Methodist Church in town (let’s face it, almost all of us have another United Methodist Church in town).  Or maybe it will be ecumenical project with a number of denominations involved.

Would it be easy?  Probably not.  Especially if your church hasn’t had a championship in what feels like 150 seasons.

Some of you are still shaking your heads.  “Our people don’t give anymore.”    Our offering plates are empty.  We don’t have enough to pay our bills, let alone go out and do ministry.”

The number one reason why people give money to one organization over another is the mission.  What is your mission?  If your mission is to keep the lights on, pay the bills, try not to mess the place up, this isn’t a mission that is likely to spark a strong generosity streak in your congregation.

What if you said your mission is to win a championship in ministry this year?  What if you set out a plan for a challenging but still attainable program?  What if you didn’t let the naysayers stand in the way?  What if you and your congregation were all in on this project?

Maybe you win the ministry championship.  Or maybe you play hard and wind up just short.   But either way your church, your members and you community will be better off because you tried.  And I assure you that if you decide to accept this challenge, the Foundation will be there to help you.

← My Favorite Wednesday
So about that whole tithing thing →